I had to put down my 12 year old cat, my first pet I ever owned and cared for myself.

Posted 3 years ago, 6 users are following.

My cat's name was Smokey, she was a thirteen pound tortie and the most loving little gal I've ever met. About a month ago, I noticed blood on her chin and that her bottom lip was drooping slightly. I took her to the vet the next day and was completely unprepared for what they told me; she had a large tumor in her jaw and they could do nothing about it. They did no biopsy and said it would be difficult to remove since it was taking up half of her jaw already. The vet gave her an antibiotic shot and a steroid shot but I knew I was pretty much trying to spend as much time with her as I could before I had to say goodbye. Well on Monday June 24th, 2019, I took her to the vet and had my last moments with her. She had started to show signs she was in pain and I promised her that I would never let her suffer, I would rather be in pain like I am now than to put her through that. I wanted to know if anybody had any suggestions to help with the healing process or how to be able to open my heart to another love when I'm ready. The picture I added is her sitting on my lap outside the vet's office, some of my last moments with her and I made sure she spent them outside of the cat carrier that she hated so much. 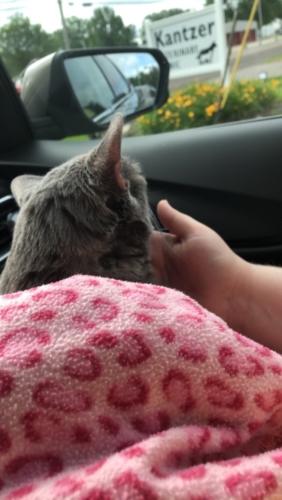