Pityriasis rosea gigantea- big ovals I had them, how many of you?

Posted 8 months ago, 4 users are following.

Most people come on here only when they need help, but many people stick around to help others, so: I had PR for over a year, and it showed no sign of going away. I was diagnosed at 9 months with a biopsy. All the dermatologist told me- actually office lady, not even doctor- was "you have PR, we're sending in a prescription for you".... Not even a "nothing helps it, it will go away after a while, it won't kill you". Nothing.

I was doing some research a couple of months ago, and found out that there is a variant of PR that has its own name, it is called pityriasis rosea gigantea. Instead of having small, well behaved itchy ovals, the ovals just spread and spread. They can by 6 inches across or more. They said that this is very rare. So, I had a very rare version of a very rare rash. One other person on here has reported having it. Anyone else?

Yes, of course I finally found Prreze, that is what made mine go away. Thanks for asking, because it certainly showed no signs of slowing down at all until I put Prreze on it. 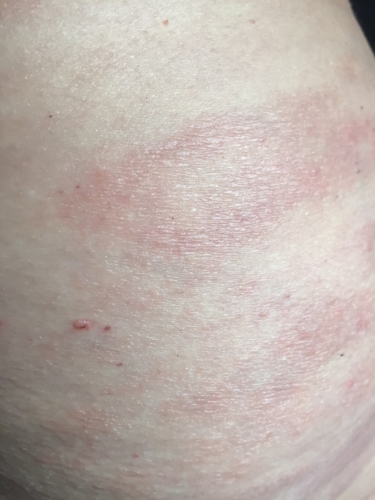