Posted 3 years ago, 6 users are following.

Hi! Just looking for any insight

I'm currently 22. For most of my life I have been stuck at 95 lbs, tried very hard to gain weight through out 2018 and started 2019 at 127lbs. I have always had an easy time moving my bowels--usually within 30 minutes of eating I would be urged to go--at least twice a day. Not used to stomach aches or being sick beyond the common cold. Have no known allergies. I have been on Lexapro 10mg (for GAD) and 100mg of Spironolactone (for Cystic Acne that has been unresponsive to other oral and topical medication) since January 2019.

Mom and maternal grandma both have peptic ulcers, otherwise there is no known digestive related issues in the family.

On April 25th, I hadn't had much to eat yet as my day was just beginning, just 3 Halls cough drops as my throat had been feeling a bit sore and I didn't have much of an appetite. After the 3rd one, I had a pain from belly button to the lower right side of my abdomen that just wasn't right. I went to the bathroom thinking I may need to go; couldn't. It was difficult to walk to and from the bathroom, to sit at my desk, just breathing. I went to Urgent Care and was sent for a CT scan thinking, like the doctor, that it was my appendix.

Test came back unremarkable; doctor suggested I may just be constipated as Easter had just past and could have been eating more than normal (unfortunately, our family did not celebrate or do anything out of the normal for Easter). I went home feeling silly for taking the day as the pain did get better over the next few days but did not go away. Yes, I was no longer going as often as I would however my bowels had gone from this: 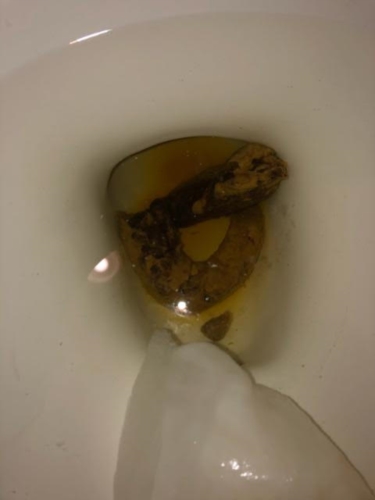 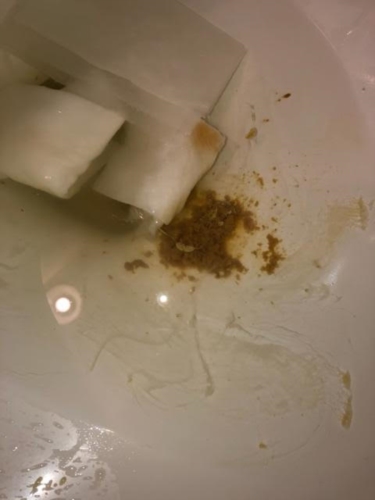 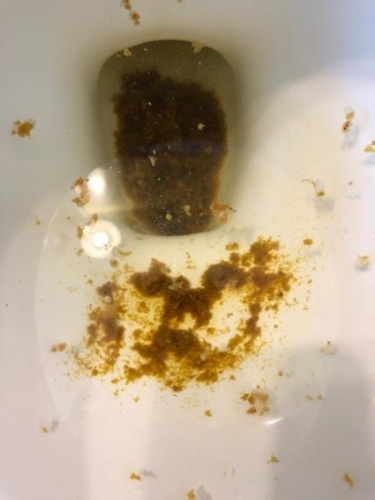 3 days later, April 28th, still with little to no appetite had a salad with cut up cucumber and almost immediately after felt as though it was going to come back up.

Now in retrospect I have been throwing up a lot more frequently within the last year than I ever have, but have been chalking it up to what I ate, as I thought this would be the same thing (ie. I had sprite with brownies I made for my moms birthday in October, threw it up. Thought it was because I don't often drink soda, and if I do only Cola. No one else got sick. In January, I ate Shake Shack with a friend. Tasted fine, threw it up hours later. Thought it may be because red meat seems to gross me when its too pink--though I thought it looked fine I thought my body might not have).

And so I did throw up. Went back to the office, took a sip of water, and knew I was going to again; I could not stop for 40+ minutes, beyond food, just bile. Hyperventilating from not having time to breathe, I could not get up. Went to the ER, was sent for a 2nd CT scan with a suspected ruptured appendix.

Unremarkable; doctor discharged me on a liquids and lights diet for a week and to follow up with PCP. I made an appointment and went the next day as I was not satisfied with the lack of care from the ER (didn't seem like they were interested in listening to my symptoms, nurse improperly injected IV which came out when injected with contrast during CT scan, and she accidentally lost 1 vial of my blood underneath me that I did not see until I got up to leave, and more). Was referred to a GI.

Saw them on May 10th, I learned at this point that I had lost 10 lbs without meaning to (haven't changed my eating besides the liquid/lights diet) and was sent for bloodwork and a stool sample. By this point my stool had started to gather a more together form: 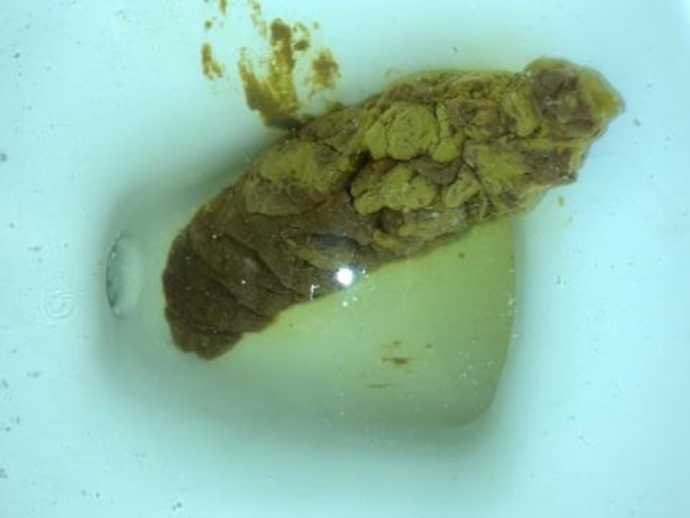 My results came back within a normal range. However the pain did not go away, for most of the day theres just a dull pressure around my lower abdomen right side only. With occasional, what feels like a, stabbing pain that usually doesn't last more than 1-2 minutes. GI sent me for an MR Enterography with contrast and glucagon. My stool had started to become loose again over the course of the month.

As per the instructions for the exam, I took 2 dulcolax the morning before it. Which could be to explain the color change in my stool: 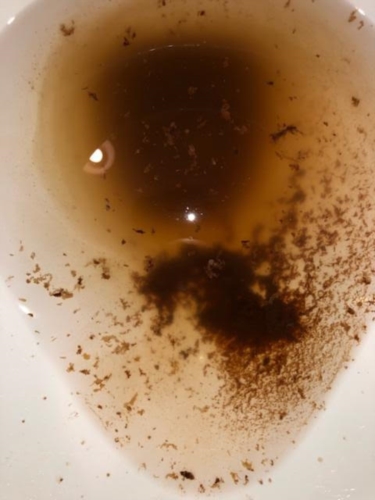 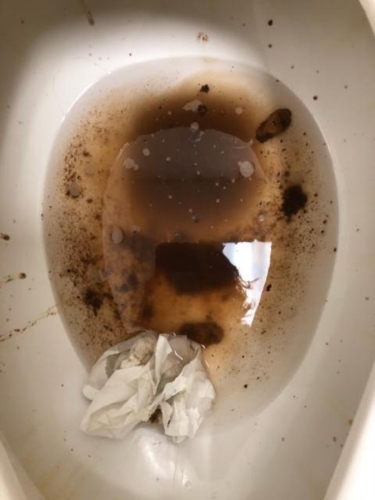 I had my MRE Saturday, June 1st. I did not eat 4 hours before it. I could not stop going to the bathroom after it, with bowel movements to the same texture as above but a bit darker-redder and just overall a lot more of it.

I was later asked to come back for additional images on the 4th, as there was an unidentifiable black mass in the original images (I don't have any piercings, definitely made sure not to wear any metal, no prior surgeries). It was gone for the 2nd round. Radiologist determined my MRE was also unremarkable.

Its the 6th, and I've only been able to pass very little since the 1st. I understand medication can be playing a role here, so I opted to put a hold on the Spironolactone since the night of May 31st as a younger cousin who had taken it before had complained of stomach aches and diarrhea while on it--however, they've expressed that it wasn't localized, and only right after they'd take it that they would have to go. However I have yet to feel a difference. I know my mental health can play its own role too, but its the best its ever been in terms of going to therapy weekly and having less attacks. So

Ultimately, if anyone has had an similar experience, or knowledge on what could be going on, please let me know ! As I have felt dismissed by most of the doctors I have seen--especially once determined my appendix isn't the cause, the only one who's truly made me feel heard is my GI who is now out for maternity leave, and I am unsure what to do