Do I have HIV/AIDS

Posted 19 months ago, 5 users are following.

I have a brief protected sex with a sex worker 4 months ago which lasts few seconds but she bleed and some of the blood touched the condom I was wearing but the condom was intact. Ever since I started worrying about being infected with HIV, I started to have some mild symptoms couple weeks later (mild muscle pain, slight head ache for two days, little bit of night sweating) I have tested five times since then at 2, 5, 9, 12 and 17 weeks which all came back negative. I also did a CBC with my last test and I had slightly high LYM% , low MID#, High RDW_SD and low vitamin B12. I am still having mild sore throat which I can only feels during some times of the day, and white tongue. I have gotten few rashes on one of my shoulders few times as shown in attached picture? Do my symptoms look like HIV? is there any other virus that could cause my symptoms? 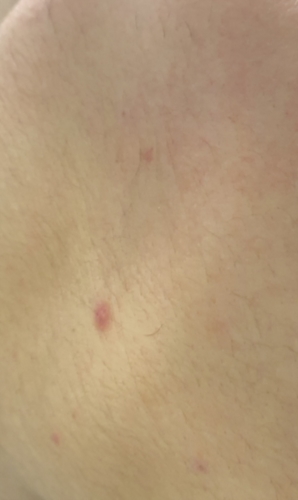