Posted 2 months ago, 1 user is following.

About five years ago, I got what looked like an afterimage about halfway between my optic nerve blind spot and the center of my vision in my right eye. However, it was not caused by light; it just appeared. At first, I could see a distortion in normal vision, but later could only see the spot by blinking at a bright blank area. It looked like an afterimage, but was not caused by light exposure. It was sharp at first, then became slightly larger and blotchy, but never too big, about the apparent size of a baseball from across a room. It persisted for several weeks, and eventually, a lighter curved band-like afterimage sprouted from that and curled in most of the way to the center of my vision. I went to the doctor and had thorough exams, and even had a fluorescein angiogram done. My doctors said there was nothing wrong, but could not explain the afterimages. These faded a bit over time, but after five years I can still see them. They did not cause scotomas, but do seem to kind of slightly blur my vision in that area.

Just recently, it happened again, this time in my left eye, a left-to-right mirror image of what happened in my right eye. It started as a sharp afterimage, then blurred, then it grew the lighter band curling in towards the center of my vision. See the image illustration attached to see what it looks like. Again, I had an angiogram done, this time tomography angiography with lasers. The doctor again reported nothing wrong. There was a slight decrease in thickness in one of the layers (Retina? Choroid? Sclera? I forget which one) which seemed to be in the shape of the distortion that I saw, but the doctor said it was minimal and dismissed it. That identical shape could not have been a coincidence. The blood vessels appeared normal and perfectly healthy.

These are very real and caused by something, but my doctors just dismiss it, and I am afraid that it is some condition that will negatively affect my vision in the future. Neither of these affect my normal vision, but now I see them all the time when I blink and there's a bright and blanks area like a wall in my field of view.

Does anyone have any insights on this? Thanks!! 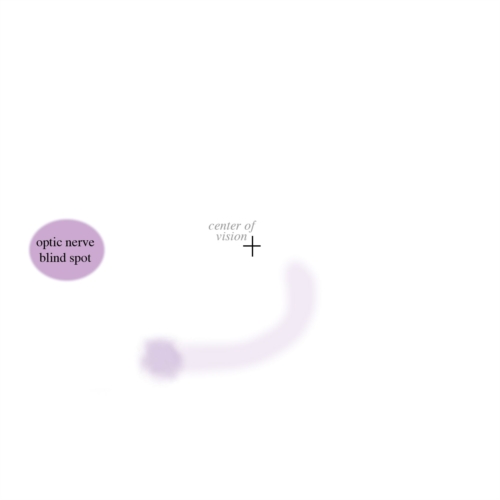