Weird bruise appeared on my back taking aidulan 20/75 worried about a blood clot!

Posted 5 months ago, 1 user is following.

I started taking Aidulan 20/75 for menstrual management of problematic periods(about to finish my last strip in my first box). I have in the past suffered with migraines of which are a risk factor with Aidulan but have been assessed and told that as my migraines aren't accompanied with aura that this isn't a problem and I hadn't had one for a very long time. I also have high blood pressure, but it seems it's only when I first see a dr/nurse as I suffer with anxiety and panic with strangers/medical environments. It is able to be bought under control to a safe level once I am relaxed.

I've been advised to take it continuously in the effort to stop my periods and had a checkup on the 19th of this month to make sure my blood pressure hadn't raised and i hadn't had any migraines etc before I was given more. I had bled continuously for a week leading up to my appointment on the 19th whilst taking my pills so I was told to take a 5-7 day break to restart the process and then to continue as before, then if i bleed in the next 6 months(more than a bit of spotting or longer than 48 hours) to do the same thing.

On the first day of my break i developed a headache, not what I considered a migraine but it continued constantly from the Tuesday to the Saturday of which I was taking paracetamol every 4 hours where possible. On the Saturday afternoon before re-taking my pill(in the evening) I developed a migraine without aura of which by the night time I took some Migraleve as I was due to attend a to a loud/busy event Sunday. This seemed to rid of the migraine within a few hours so I could sleep. During the Sunday I had a few little 'twinges' when turning my head so took some paracetamol once I got to the event just incase anything was to develop. On the way home from this event I developed another migraine and had to sleep on my partners shoulder on public transport to ease it. When I woke up it wasn't as bad but still had a headache and was very irritable.

Monday morning I felt fine! Which is why i'm possibly linking these headaches to the 5 day pill break I took. As I had a headache every day I didn't take them which by the end of the week were migraine territory. I went through monday with a couple of twinges but didn't want to take any more painkillers as they was manageable and didn't want phantom pains from taking paracetamol for a long period of time! No headache/migraine on the Monday.

The tuesday I had no headache, migraine or twinges but on the Tuesday evening i was sitting down with my back to my partner and he noticed I had a red/purple blotchy mark covering the left middle side of my back. It's almost similar to a hickey in the way it's blotchy and spread out. I've had no trauma to my back and nothing covering my back on this day/rubbing and its under the skin(not a graze). It doesn't feel bruised and I don't feel unwell - only usual fatigue that I feel on a daily basis. I wasn't in any crowds at the event the day before and the bruising wasn't there at 4pm on Tuesday. My partner noticed it at around 8pm.

I was suffering with some neck pain which worried me a little last night(the Tuesday) so I decided to do the silly thing and google my symptoms of which told me it's a blood clot (risk associated with Aidulan which could lead to stroke) and possibly Leukemia/sepsis/meningitis!! I've logged into my GP's online portal of which there is no available appointments for the next week, and navigated the online 111 service which has told me to see a GP within 2 hours(2 hours has now passed) or visit an urgent care centre many miles away.

So basically, to cut a long story short. I take Aidulan, i've had headaches/migraines for the last week which have now subsided, but I have suspect bruising on my back with no cause/trauma.

Should I be worried? Should I make the journey to A&E or will I be laughed out for wasting time for a bruise? Does anyone have any similar pictures? I don't know what it is and can't find anything on google images that looks remotely similar.

To add, I have done a glass test and the mark doesn't disappear under glass. 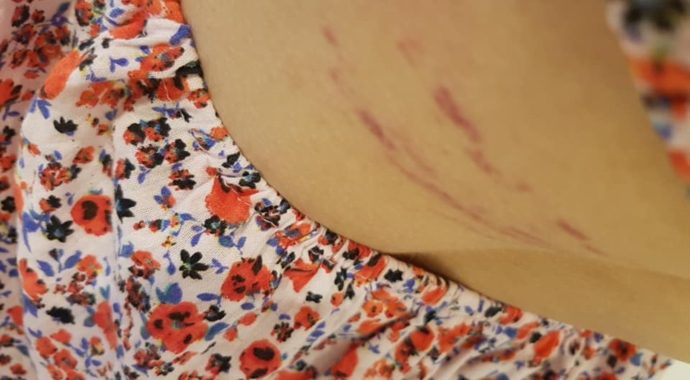 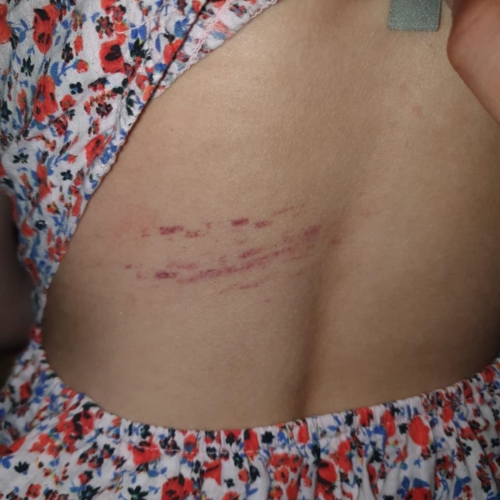