Can I treat chronic pain with CBD?

An estimated 28 million people in the UK live with pain. Following the COVID-19 pandemic, this number is likely to rise, with chest pain and joint pain being common symptoms of long COVID. Doctors, patients and campaigners explain how CBD controls their pain, and how further research might widen access.

Noel*, 46, was diagnosed with multiple sclerosis (MS) just over six years ago. Before his diagnosis he'd noticed a number of symptoms, including back problems and muscle problems, and had been prescribed codeine to cope. He works long hours at a desk job and at the time, noticed that it was getting more and more painful to sit down all day.

After his diagnosis he says his pain was managed well by his consultant and the local nursing team, but he was somewhat anxious about using opioids because of concerns about dependence.

Noel also bought a CBD product over the internet and found that while it improved his sleep, including on nights when his back pain was worse, it didn't have a significant effect on his pain.

Having smoked cannabis as a teenager, and knowing another friend with a different chronic health condition who smokes cannabis to manage pain symptoms, Noel started smoking cannabis again. He works full-time and smokes in the evenings: he says cannabis improves his sleep, reduces pain and relaxes his muscles.

CBD is one of many constituents of cannabis. Delta-9-tetrahydrocannabinol (THC) is the psychoactive part of cannabis. It is products containing cannabidiol (CBD), which does not cause a 'high', which have seen an explosion in use in recent years.

Possession of cannabis is still illegal in the UK so many turn to CBD products, some of which are available legally in the UK over the counter (without a prescription). CBD products get the green light whenever they can demonstrate acceptably low levels of THC. CBD can be extracted from cannabis, or from hemp (a legal variety of the cannabis plant that has little or no THC).

Many people have tried CBD to treat problems such as mild pain (such as period pain) or poor sleep. Anecdotally, some have seen a benefit. The problem for consumers is that there is not yet a recognised standard for CBD products, so it is impossible to know the efficacy of a product, or the amount of CBD it contains.

In its November 2019 guidance, the National Institute for Health and Care Excellence (NICE), the body that advises the NHS on evidence, identified certain conditions where CBD, THC or combination products should be recommended for use on the NHS. The products and combinations they recommended varied with the conditions they considered - severe nausea and vomiting brought on by chemotherapy, MS, and certain types of treatment-resistant epilepsy.

NICE said that doctors should not offer CBD, THC or a combination to people with chronic pain. But it did advise that adults who already use cannabis-based medicinal products should carry on - at least until they and their doctor think it is appropriate to stop.

CBD treatments are sometimes used for epilepsy and cancer, but they are licensed to treat seizures or nausea - not pain. Likewise a CBD:THC treatment, Sativex, is licensed for muscle spasms (also called spasticity) in MS and recommended by NICE in certain circumstances - but again, not for pain symptoms.

In its guidance on cannabis-based medicinal products, NICE only recommended one highly purified CBD product, Epidyolex®. Even then, it's only recommended in certain situations for people with two rare forms of treatment-resistant epilepsy, Lennox-Gastaut syndrome or Dravet syndrome.

However, earlier this year NICE was forced to issue a clarification about its advice on cannabis-based medicinal products for people with epilepsy. It highlighted that in its guidance it concluded that there wasn't enough evidence to make a population-wide recommendation on using these products in patients with severe treatment-resistant epilepsy. However, NICE clarified that this did not mean it was recommending against using them more widely, and that doctors should still feel able to use them if they felt it was appropriate.

Researchers and clinicians warn about the impact that the lobby for recreational cannabis might have on slowing or stopping progress on medical cannabis.

Dr Arun Bhaskar is a head of service and consultant in pain medicine at Imperial, and president of the British Pain Society. He says that CBD on its own is inherently safer compared to products with CBD and THC, particularly where we might be concerned about mental health side effects.

Research into pain can be challenging, he adds. Although typical standards of evidence for clinical trials, double-blind randomised control trials (RCTs), are still the right ones to use when studying chronic pain treatment, research into chronic pain can be difficult to quantify. That's because pain reporting relies on more subjective measures (namely pain scores) rather than objective quantitative measurement (such as changes in size, weight or blood pressure).

Chronic pain has a huge impact on people's quality of life and mental health: one estimate found that up to 85% of people with chronic pain may also suffer from severe depression.

"We don't want to waste taxpayers' money chasing treatments that don't work and we also don't want to spend a lot of money on unnecessary medical admissions and social care for patients who can benefit from treatments which will improve that pain and their quality of life," he says. "The vast majority of chronic pain patients are desperate to find an answer."

He suggests an NHS registry to record patients' experience of how medical cannabis or CBD treatments affect chronic pain symptoms could improve the use and understanding of treatment.

In May this year, the first analysis from the UK Medical Cannabis Registry found that for 129 patients in its study, researchers saw statistically significant improvements in chronic pain symptoms. Study authors wrote that subsequent studies will analyse effectiveness and safety of cannabis-based medicinal products for chronic pain patients. Readers were advised to note that several of the study authors have an interest in the privately operated Sapphire Medical Clinics; that said, a non-profit research organisation in New Zealand found similar results about chronic pain in a similar-sized study.

As doctors well know, people who use medical cannabis have developed their own approaches to law and policy prohibitions. Patient advocacy groups have crystallised around services like CanCard, a privately run membership system that offers people with certain diagnoses a form of ID to say so. The ID is a 'mitigating factor' that the scheme says may prevent or reduce the risk of arrest for possession, but it does not 'legalise' cannabis for the cardholder.

Charities have also campaigned for exemption: since 2017 the MS Society has requested that no MS patient be charged for using cannabis to treat symptoms.

MS patients are eligible for a CBD treatment called Sativex (also known as nabiximols) but the drug is currently only available to people with 'moderate' or 'severe' muscle stiffness or spasms. It is also only available to NHS patients in England and Wales, so far.

NICE estimates that about 4,800 people in England are eligible to try Sativex but according to NHS data from May, MS Society estimates that only 630 people were issued with a prescription.

A new campaign by MS Society aims to widen access to Sativex by campaigning for CCGs to add the drug to the list of options available locally (known as the formulary).

Fredi Cavander-Attwood, policy manager for health and social care at MS Society, says the charity wants to see more research into the safety, quality and efficacy of unlicensed and licensed forms of cannabis for pain: "It is a priority research area - the Chief Medical Officer carried out a review of medicinal cannabis in 2018 and found that there was conclusive or substantial evidence for the efficacy of medicinal cannabis products for chronic pain."

Leo*, 49, was diagnosed with MS in 2003, and has sensory pain in his hands and feet with pain and stiffness in his calf muscles. He has been using a first-line treatment for his leg pain and stiffness for a while, but hopes to discuss Sativex with his MS nurse when they meet again soon.

"I considered Sativex over a year ago but was told I need to persist with baclofen, which I have been on for some time," he says. "I thought that the lack of efficacy was something I had to put up with. I am hoping it will help with my walking distance and general mobility. The stiffness makes it hard to walk, and tiring. If Sativex can help alleviate even a percentage of the stiffness and pain it will be worthwhile."

Helping clinicians see the evidence will make it easier for them to help patients like Leo make informed decisions about their options.

While some patients are still waiting for prescriptions, others are sticking with what works - and doctors know it.

Neil has told his doctors that he smokes cannabis and says that apart from warnings about the dangers of smoking, he has felt that his doctors haven't hassled him to stop.

"I think making cannabis more widely available on the NHS would be better," he says. "They've accepted that it works." 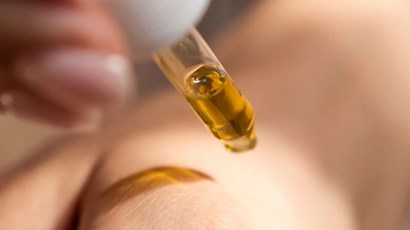 Can I treat chronic pain with CBD?

ive been experience pain in my left leg for around 4 days now. its really starting to bother me.i have noticed i have a scratch on my leg, but this looks to have healed and scabbed over, but it is...