In this series Chronic Sinusitis

Acute sinusitis is a sinus infection which usually goes away on its own without treatment. There are various treatments that may help to ease symptoms. Antibiotic medicines are only sometimes needed. Complications are uncommon but include persistent (chronic) sinusitis and the infection spreading to nearby structures.

Sinusitis means inflammation of a sinus. Most bouts of sinusitis are caused by an infection. The cheekbone (maxillary) sinuses are the most commonly affected.

The rest of this leaflet is about acute sinusitis.

How do you get acute sinusitis?

After a cold or the flu

In most people, acute sinusitis develops after a cold or flu-like illness. Colds and flu are caused by germs called viruses which may spread to the sinuses. The infection usually remains viral before clearing, causing a viral sinus infection. In a small number of cases, germs called bacteria add on to an infection that started with a virus. This can cause a bacterial sinus infection which can make the infection worse and last longer.

Spread from a dental infection

In some cases, infection spreads to a cheekbone (maxillary) sinus from an infected tooth.

Other risk factors for sinus infection

In some people, one or more factors are present that may cause the sinuses to be more prone to infection. These include:

What are the symptoms of acute sinusitis?

Symptoms that commonly occur include:

Other symptoms that may occur include:

In children, symptoms may include:

How is acute sinusitis diagnosed?

How long does it take for acute sinusitis to go away?

Like with colds, the immune system usually clears the infection and symptoms generally go within 2-3 weeks.

What is the best treatment for sinusitis?

Acute sinusitis often clears up without treatment. However, there are several things you can do to treat the symptoms in the meantime.

What is the fastest way to get rid of a sinus infection?

The body's defence system usually takes at least 10 days to fight the infection. There's nothing you can do to speed up this process, but self-help treatment of the symptoms will help you feel better in the meantime.

If your symptoms persist for more than 10 days your doctor may consider prescribing a high-dose steroid nose spray such as mometasone.

Not usually. Department of Health guidelines recommend that antibiotics should not be used for at least the first 10 days. Most cases of acute sinusitis are due to infection with a germ called a virus. Antibiotics do not kill viruses and they can cause side-effects such as sickness and diarrhoea.

They may be considered if you become very unwell or if your symptoms persist after 10 days and don't respond to other measures. This is more likely to happen in people who have illnesses which make them prone to bacterial infection, such as cystic fibrosis, heart problems or a weakened immune system.

If needed, what is the best antibiotic?

Phenoxymethylpenicillin is recommended unless you are very unwell, in which case co-amoxiclav may be prescribed. If you are allergic to penicillin, there are other options such as doxycycline.

Some treatments may help to relieve symptoms whilst you are waiting for your immune system to clear the infection. These include the following:

Steam inhalation is a traditional remedy but is now not usually advised. This is because there is little evidence that it helps. Also, there have been some reports of people burning themselves trying to breathe in steam from a kettle. However, some people say that their nose feels clearer for a short while after a hot shower.

Note: see a doctor if symptoms become severe or do not ease within 10 days. (However, as mentioned, it is common to take 2-3 weeks for symptoms to go completely.) The sort of symptoms you should tell a doctor about include:

You should also see a doctor if you have recurring bouts of sinusitis, as this may indicate an underlying problem.

Acute sinusitis may be contagious if the infection is due to a virus, but not if the cause is bacterial. You can pass it on like a cold. Sneezing, for example, can send virus-containing droplets into the air, which can then be breathed in by a person nearby.

Are there any complications from acute sinusitis?

Other complications are rare. However, they can be serious. For example, infection may spread from a sinus to around an eye, into bones, into the blood, or into the brain. These severe complications are estimated to occur in about 1 in 10,000 cases of acute sinusitis. They are more common with infection of the frontal sinus. Children are more prone than adults are to complications. Swelling or redness of an eyelid or cheek in a child with sinusitis should be reported to a doctor urgently. 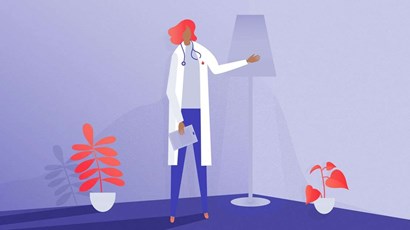 Over the past few years I've had what seems to be a recurring sinus infection with the same symptoms each time. The main symptom is a horrible smell in my nose and a feeling of pressure around the...