How to find the perfect running shoes for your feet

Whether you've only just decided to take up running, or have long been in training for a marathon, having the right pair of trainers can make a big difference in keeping injuries at bay. But before you think about buying the latest brand, always make sure you get the best advice, as I discovered on a recent shopping trip to London.

Who knew shopping for trainers could be such an exercise in patience? With a nip in the London air, it's approaching lunchtime and I have already been turned away from two specialist running shops in succession due to stock deficits.

The empty shelves in the two stores - both located a stone's throw from St Paul's Cathedral - bear witness to that most popular of New Year's resolutions: doing more exercise.

Everyone starts running around this time of the year,” one of the shop owners had told me, motioning to the empty shelves around her. “Then it hits summer and they all give up.”

I was surprised to hear such cynicism - in a sports shop, of all places. After all, aren't we a nation of runners? According to Sport England, in 2014 there were over two million people running every week, up from 825,000 in 2005.

Barefoot running fundamentalists aside, seeking out the right pair of trainers, befitting of both your foot type and your activity of choice - whether it's light jogging, a 10K run or cross country - can help prevent unwanted injuries. So it's worth your while to ensure you receive the right advice before delving into the coffers.

These thoughts run through my head when I enter the third shop of the day, across the road from bustling Holborn underground station.

I tell a staff member I am looking to take up running from scratch using the NHS Couch to 5K app, and am without a pair of trainers to my name. (This isn't true, but for the purposes of undercover journalism …) After being asked my shoe size, I am given a pair of 'neutral' trainers to put on before alighting a treadmill for gait analysis.

I am on there for a couple of minutes, while the attendant gradually ratchets up the speed to 6 km/hour. After which, we both watch a slow-motion film of my ankles in action - which, safe to say, won't be contending for an Oscar anytime soon - to look for signs of pronation. While this is a natural movement of the foot, the size of the runner's arch can impact its ability to roll, creating either supination - also known as under-pronation - or over-pronation

A diagnosis is imparted. There is evidence of slight over-pronation on my right ankle; none on the left. I am recommended 'neutral trainers', as opposed to pairs with reinforced padding around the ankle.

This was the right call, says podiatrist Dina Gohil, to whom I later relay the details of my trainer shopping odyssey.

"For slight over-pronation in one foot - and for the activity you specified - a neutral trainer would be sufficient," says Gohil, who runs her own London-based practice, DG Podiatrist Mayfair. "Also, if you required it, mid-foot support in the arch of an insole could be fitted to help."

Back in the store, I try on four pairs of trainers of varying lightness and price - ranging from £70-120 - and am advised to run around the shop to get a feel for them. (Feeling self-conscious, I opt to go back on the treadmill). I ask the assistant - who tells me she is in training for the Paris Marathon in April - about how my feet should land when running.

There is no textbook rule on this, she says. "Everybody is different." However, her personal preference is to land on the forefoot, rather than the heel, as she believes it can prevent runner's knee.

"Evidence is thin on this matter," says Gohil. "Traditionally, running with a heel strike first allows for the impact to travel from your heels up to your knee, then hip and lower back. For some, this has caused some knee and hip injuries.

"Those with a history of injury in this manner may find it beneficial to try to change their running technique to the forefoot. Forefoot running can lead to a more natural shock absorber upon ground impact, as the ankle and knee are bent and the hip is slightly open.

"However, transitioning too fast to this technique may cause pain and lead to other injuries, such as Achilles tendonitis, calf injuries, strains and injuries in the foot. Forefoot running allows for increased speed."

Having told the shop assistant that I'll have a think on it, I walk down to Covent Garden to another store, belonging to the same chain. I tell the person at the front desk that I'm a new 10K graduate, "looking to take things to the next level". I cringe when I hear myself say this, but she nods her head in solicitousness. Or was it disbelief?

There is no science lesson or video on pronation this time around. I am taken over immediately to the dizzying array of brands on display on the back wall. I am again asked my shoe size. It's size 8, so the attendant says she will increase it by a half a size, allowing for around a centimetre between the toes and the front of the trainer.

"That's great advice," says Gohil. "Your running shoe should be roughly half a size larger, as this provides more space where the toes sit - also known as the toe box. When you run, your feet will swell, so by having that extra room, they will not feel and become squashed.

"Lack of space can cause forefoot trauma, such as blisters and damage to the nails, including black nails or nail loss."

I try on a couple of pairs on the treadmill, with the attendant setting the speed at a wheeze-inducing 10 km/hour. Upon hearing I won't be buying anything today, she seems slightly vexed, and scolds me for not having brought my current pair of trainers with me. Apparently, they are a required benchmark when upgrading. Well, that told me.

"It is easier for a sales assistant to see your old pair and suggest another," affirms Gohil. "How and why? An old pair can indicate the shape you require, the functions of the trainer that suits you best - such as structure, pronator or neutral - and how you wear them."

Now into the afternoon, an intense winter sun darts down as I make my way across Green Park, via Buckingham Palace, to my final stop on the itinerary - an independent running store across the road from Victoria Station.

I tell another fib, informing the assistant that after years of "strenuous road running", I feel like a new challenge: cross country. I am asked off the bat about the terrain I will be covering: grass and mud, rocks - or all three? I hem and haw before saying "all three". The next question stumps me even more: "Are your feet are narrow or wide?" Isn't this subjective, I wonder, before plumping tenuously for "narrow".

Selecting a couple of pairs with hard studs, I am advised to try them on a strip of running track that bisects through the middle of the shop floor. Having not done any form of cross country since my school days, I can't tell, on this light, springy surface, whether they would be suitable for scrambling through the countryside. Maybe running shops should also include rock gardens and dirt tracks.

In fairness, the assistant soon tells me it is only her second week in the job, when I throw in a question about pronation - a word I have, admittedly only learnt for the first time today - suggesting I come back later in the week to speak with the store’s resident physiotherapist. If I book the session now, it will cost me "only £40".

"It was nice of her to be honest and ask you to come back and not try to sell you a pair without knowledge on what you would need," says Gohil.

"There are usually two forms of spikes - track and cross-country. The key difference is predominantly its cushioning. Cross country tends to have more cushioning in the forefoot and rear-foot. The idea of the spikes is solely for traction when running. The safe principle to apply would be to ensure there is enough space in the toe box.

"Width is important too, as you want to ensure the foot is being supported correctly."

And with that, my day of shop-floor browsing is at an end. As my train home departs Victoria shortly afterwards, I come to the conclusion that some of London’s running stores might be struggling with New Year supply-and-demand blues. But there is no shortage of decent advice at hand when it comes to choosing your next pair of trainers - whatever the activity might be.

How to keep your feet problem-free 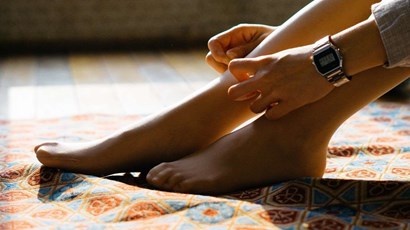 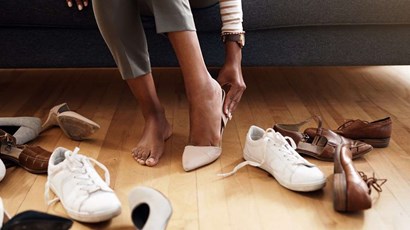 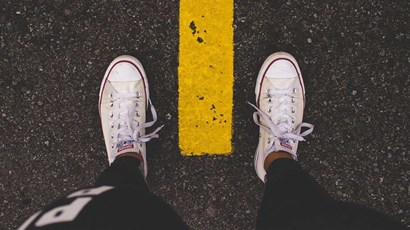 My boyfriend has planter fasciiis in his right foot. He just had a amniotic injection a few days ago. Has anyone done this and did it help?

How to keep your feet problem-free