Should vaginal mesh surgery be banned?

When Kath Sansom first went to her GP, worried about incontinence, she was a fit and active mother of two teenage daughters who, like many women of a certain age, had started to experience embarrassing leaks during exercise.

"I was referred to a consultant, and the vaginal mesh operation was very much sold to me as a quick and simple fix. I was told I'd be a day case, out in 20 minutes, home in time for tea, and back at my desk in a week," she explains. In reality though, Sansom says she came out in so much pain she could hardly walk - and she's not the only one.

In January this year, 58-year-old Lucinda Methuen-Campbell from Wales killed herself, having suffered in "agony" following a pelvic mesh operation two years earlier. Before her death, Methuen-Campbell told her former partner that: "There didn't seem to be any way out of the pain."

Complications linked to the mesh implants have become a global scandal in recent years, with hundreds of British women taking legal action against both the NHS and mesh manufacturers after being left in constant pain and discomfort. Tens of thousands more in the USA have sued manufacturers, with payouts totalling billions of dollars.

What is vaginal mesh and why is it used?

Vaginal mesh is a plastic implant, made from polypropylene, used to treat incontinence and pelvic organ prolapse - conditions which, in varying degrees, affect roughly half of all women who have given birth. Indeed, between April 2007 and March 2015, more than 92,000 women in England alone were treated using the implant.

But given all the controversy that's emerged since, how did this treatment get signed off in the first place?

"Vaginal mesh was created really as a simpler version of other surgery. All other surgery required probably years of training, apprenticeship-type work, and years of understanding inner muscles, skin, and so on," explains Dr Sohier Elneil, consultant urogynaecologist and uro-neurologist at University College Hospital.

"The mesh was created mainly in the mid to late '90s with a view that you could simply implant, effectively a scaffold, to hold up the prolapse, or to hold up the urethra - which is the pipe coming out of the bladder - and prevent stress incontinence and prolapse respectively," she adds. "So it was really billed as a simpler way of treating many women quickly."

The problem, Elneil explains, is that its sign-off was largely based on previous products made of a similar material.

"The same material has been used for hernia repair, for instance, and it was thought to be safe. So everybody thought, well if you can use it there, you can use it here."

Official statistics suggest that around 10% of women experience problems with vaginal mesh implants, but Sansom believes many studies are misleading because they only look at the direct clinical outcome, rather than broader quality of life.

"If you were to come to me now with one of the questionnaires they used, I would come out as a success, because it fixed my incontinence," she says.

"If you use questionnaires in your study that don't ask, 'Are you in pain? Have you got constant UTIs? Have you lost your sex life?' then you're not capturing all that information that really does impact on women's quality of life," Sansom adds.

And, as Elneil points out, the problems themselves can be difficult to quantify accurately.

"You can't measure pain, so it can be very easily dismissed - and indeed it was in many women's cases. For some women it was taken seriously, but there's a tendency to attribute the pain to other things, and often the approach is to treat the pain rather than the cause of the pain."

After experiencing problems herself, Sansom established a support and campaigning group, Sling The Mesh, which now has more than 6,000 members. According to her: "Eight out of ten women suffer pain that affects their daily living. 70% of women in my group have lost their sex lives. 50% have constant UTIs, which means they then start becoming antibiotic-resistant and have to go into hospital for an IV drip every time they get cystitis. 70% have depression; there are women who are suicidal, some who've attempted suicide."

A third of the women, Sansom adds, have had to give up work, while a fifth have had to reduce their hours.

"It's ruined their lives. And these are women who perhaps just worked out at a Zumba® class and weed their pants a bit. Now, here they are: lost sex lives, lost jobs," she says.

"For some of them the pain - like cheese wire within your vagina and pelvic area - is so intense that they're in tears even just walking around their home. They're at their wit's end, and it doesn't settle; this is for life. That's what's so upsetting."

Mesh removal surgery is an option that Sansom and many others have undergone - often paying privately out of their own pockets - but even this, she says, is no miracle cure.

"Nobody goes back to what they were, including me. For a lot of women, they are improved, but you're not the same woman again, ever. You have to accept a new normal," she says.

"For me, when I had my mesh removal, thank the Lord, I got my sex life back. But what I didn't get back was the ability to run and work out," Sansom explains. "Any kind of impact on my legs kicks in like nerve damage pain within a few hours. Before the mesh, I was training to cycle at the Marin Trail in Snowdon - that's how super fit I was. Now I really struggle to cycle more than a mile because it hurts my legs and my private parts so much."

What the guidelines say

In December 2017, National Institute for Health and Care Excellence (NICE) guidelines were updated to recommend that vaginal mesh should only be used to treat pelvic organ prolapse in the context of research.

However, says Mr Edward Morris, vice president for clinical quality for the Royal College of Obstetricians and Gynaecologists (RCOG), says: "There is a small subset of women for whom other surgical interventions are not appropriate for their prolapse and the use of mesh may be of benefit to them, provided they have appropriate information and counselling about the risks and benefits, and have explored all other treatment options. The RCOG is concerned that this guidance may leave these women without an effective option to manage their condition."

The implants continue to be recommended as treatment for stress urinary incontinence, although this guidance is currently being updated in line with new research.

"The most recent NHS England report outlined the ongoing work taking place across the NHS to ensure good outcomes for all women undergoing procedures involving mesh, and to reduce the number of those experiencing complications," he adds.

"Specialist training, surgical experience, and appropriate patient selection are all crucial factors in ensuring current and future patients receive the highest-quality care. And it's important that women with urinary incontinence have access to consistent information to enable and support them to have a structured discussion with their clinician about all the treatment options and ensure the risks are fully explored and understood."

"Prevention is, without a doubt, the best alternative," says Myra Robson - a pelvic health physiotherapist at Lewisham and Greenwich NHS Trust, founder of pelvic floor training app Squeezy, and co-founder of pelvic health campaign group Pelvic Roar. "We need more open discussions to raise awareness and understanding of stress incontinence and prolapse, so women can access treatment at an early stage," she says.

Both before and after problems arise, Robson recommends seeking pelvic floor muscle training with a specialist physio, as well as understanding the impact of excess weight, smoking, heavy lifting, high-impact exercise, constipation and insufficient postnatal recovery on the pelvic floor.

"Make sure you're fit for any sports you do, and wear supportive sports clothing, as activities like running and CrossFit can be high-impact on your pelvic floor," she adds. "There is also a variety of excellent gadgets to help with pelvic floor training, but if possible always consult a physio first."

For Elneil, the most important thing is that all patients should be informed of the full range of options, and encouraged to try more conservative, self-help measures before considering surgery of any kind.

"All the non-surgical options should be properly exhausted first. Patients must all undergo proper physiotherapy with a dedicated women's health physiotherapist, for up to six months in some cases. With prolapse and some forms of incontinence, you can also have support pessaries put in," she explains.

"If all those options have been exhausted and there's still a problem, patients should ask about minimally invasive surgeries - so the smallest possible options, as well as the larger options," she adds. More old-fashioned (and often more complex, time-consuming) surgical treatments include a Burch colposuspension, which uses sutures, or an autologous fascial sling, which uses your own tissue to create a sling.

Whatever a woman decides, she adds, "informed consent is the most important thing. They should all be given proper information leaflets and allowed to go away, think about it, research it, and come back to discuss it. Anyone who does have a mesh device fitted should also be carefully assessed and followed up regularly. Women need to feel empowered about their health and carry on asking questions." 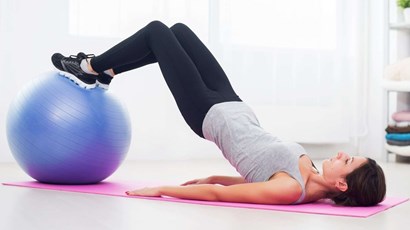 1 (27F) have had stomach problems for awhile now, when I was 15 it was just nausea vomiting and stomach pain, I got a colonoscopy done at 16 which was clear so I was told it must be IBS. Fast forward...