Raynaud's phenomenon, often just called Raynaud's, is a condition where the small blood vessels of the fingers become narrow (constrict), most commonly when they are in a cool environment. Sometimes blood vessels to other extremities such as the toes, ears and nose are affected. It is named after Dr Maurice Raynaud, the man who first described it in 1862.

Raynaud's phenomenon occurs when the extremities of the body, usually the fingers and toes, change colour and may become painful. It is due to a narrowing (constriction) of the small blood vessels on exposure to the cold, or to a change in temperature, or to emotional stress. In most cases, the cause is not known. In some cases, it is a symptom of an underlying condition such as scleroderma, lupus, or rheumatoid arthritis.

Typically, symptoms develop in fingers when you become cool - for example, in cold weather.

Many people with Raynaud's do not have the full classic colour changes but develop bouts of uncomfortable, pale, cold fingers. Only the fingers are affected in most cases. In some cases the toes are also affected. Less commonly other extremities of the body are affected, such as the earlobes, nose, nipples or tongue. Each bout of symptoms can last from minutes to hours.

Primary Raynaud's - when the cause is not known

In most cases there is no known cause (more than 9 in 10 cases). This is called primary Raynaud's. The small blood vessels in the fingers, toes, etc, just appear to be more sensitive than normal to cool temperatures. There is no other underlying disease. Symptoms are triggered more easily in some people than in others. Even mildly cool weather, or getting something out of the freezer, can trigger symptoms in some people. Strong emotion may also trigger symptoms in some cases.

Usually, all fingers on both hands are affected in primary Raynaud's. It also tends to run in some families. Women are affected much more often than men. It usually first develops before the age of 30. There are no other symptoms apart from those described above, and symptoms go completely after each bout.

Secondary Raynaud's - due to an underlying cause

In fewer than 1 in 10 cases, there is an underlying cause. This is called secondary Raynaud's. Various conditions of blood vessels, joints, muscles, nerves or skin can cause secondary Raynaud's. For example, scleroderma, rheumatoid arthritis, multiple sclerosis, systemic lupus erythematosus (SLE) and other 'connective tissue' diseases.

If you have secondary Raynaud's you will normally have other symptoms in addition to the symptoms of Raynaud's. The Raynaud's is just one feature of the condition. For example, you may also have joint pains, rashes, joint swelling, etc.

Hand-arm vibration syndrome (vibration white finger) is one common cause of secondary Raynaud's. This is caused by using vibrating tools regularly over a long time. For example, it occurs in some shipyard workers, mine workers, road diggers, etc. It is thought that repeated vibrations over time may damage the small blood vessels or their nerve supply.

How common is Raynaud's?

Do I need any tests to confirm the diagnosis?

Not in most cases. There is no test that confirms primary Raynaud's. The diagnosis of primary Raynaud's is made on the basis of the typical symptoms (described above) and there is no abnormality found that may suggest a secondary cause when a doctor examines you.

Features that may suggest secondary Raynaud's include:

Blood tests and other tests may be done if secondary Raynaud's is suspected. Sometimes the diagnosis of an underlying cause is already known (for example, rheumatoid arthritis) and the development of Raynaud's is not a surprising feature.

Keeping warm is the main treatment. Symptoms are much less likely to occur, and be less severe, if you keep warm (described above). Other treatments are needed only in some cases.

A calcium-channel blocker called nifedipine may be advised if symptoms are severe. It works by 'opening up' (dilating) the small blood vessels. Some people take nifedipine regularly, each day, to prevent symptoms.

Various other medicines may be tried if nifedipine is not helpful, or causes side-effects. In particular, various medicines have been tried to some effect for people with secondary Raynaud's due to certain conditions.

These may be helpful if you have primary Raynaud's and the symptoms are triggered by stress or emotion.

'Nerve blocks' or other hospital-based treatments

May be tried if you have severe Raynaud's which is not helped by other treatments.

The outlook for people with primary Raynaud's is usually good. Most people have mild symptoms that do not interfere much with daily life. People with more severe symptoms often respond well to treatment with nifedipine. In some cases the condition goes away (remits) in time. In one study that followed up people with primary Raynaud's over seven years, the condition had gone away in nearly two in three cases at some point over the study period. 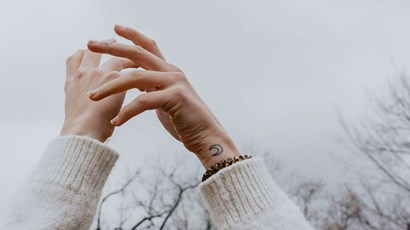 How to deal with Raynaud's in the winter months

I recently gave up caffeine in an attempt to alleviate another condition I have.Consequently I've found that my fingers have not gone white despite my playing golf on Saturday mornings in low to...