What is hypermobility syndrome?

Having supple joints with a wide range of motion allows the body to move freely, and for some people - gymnasts, athletes and dancers, for example - this can be an advantage. But being super flexible can have its drawbacks, too. When you're hypermobile, your joints move easily beyond the normal range. Over time, this can cause pain and in the very worst cases, dislocation or long-term damage to the joint. It can also be linked to a range of issues in other parts of the body.

Many people have hypermobile joints but don't know it, because the degree to which their joints flex is normal for them and has never been a cause for concern.

You may only become aware of a problem if you begin to experience pain or get injured, particularly as a result of an activity or movement that wouldn't ordinarily cause a problem - for example, badly twisting an ankle when you stand from a seated position.

"All hypermobile joints are at increased risk of injury, due to the laxity and increased range of motion," explains sports scientist and therapist Dawn Morse. "Pain may also be felt within the joint or the associated muscles, and the joint itself may even dislocate."

This is when a doctor or physiotherapist might suspect one of the hypermobility spectrum disorders (HSD) - more of this complex spectrum of conditions later. Symptoms often appear first in childhood, but the diagnosis might not be made for some years, especially as individual bouts of pain often settle on their own. HSD-related pain in under-12s in particular may be mistaken for growing pains.

A range of symptoms

Some people are simply very flexible, in the same way that some are very tall, and this is not a medical condition if they have no symptoms from it. People who have a range of hypermobility-related conditions, but who do not fulfil all the criteria for one of the Ehlers-Danlos syndromes (EDS), are now classified as having hypermobility spectrum disorders (HSD).

At the severe end of the spectrum, people with hypermobile joints can have extremely debilitating symptoms and severe, potentially life-threatening associated abnormalities due to one of the Ehlers-Danlos syndromes (EDS).

Kerry Clayton from Kent noticed she was more flexible than her friends during childhood. "I could sit cross-legged at school and pop my hips, and I was about 10 and jumping on a trampoline when my shoulder dislocated," she recalls. "From there, it got progressively worse."

Her GP didn't refer her and Clayton went on to suffer for years with problems like chronic pain, muscle aches, extreme tiredness, and cognitive impairment, as well as frequent full or partial joint dislocations.

Clayton was finally referred to a specialist to have her symptoms investigated five years ago, when she was 24.

As well as examining the range of movement in a person's spine, hips, shoulders and smaller joints, a healthcare professional might use the Beighton score to help them to diagnose HSD.

You score one point for each knee, elbow, thumb and little finger that bends backwards by a certain degree, and a point if you can bend forwards and place your hands flat on the floor without bending your legs.

The maximum is nine points, where four points indicate that general hypermobility is likely, and if you've also had pain in four or more joints for at least three months, HSD is likely.

Your healthcare professional might use other information to support their diagnosis. For example, having joints that click when they move, being able to do the splits (now or in the past) or previously having dislocated a joint could also point to HSD.

Sometimes, joint hypermobility is a sign of another condition. For example, symptomatic hypermobility accompanied by extreme fatigue and stretchy, fragile skin could signal a connective tissue disorder that's passed down from one or both parents.

The Ehlers-Danlos syndromes (EDS) are one such group of disorders, a group of conditions caused by a genetic fault with the body's collagen.

Less common forms of the syndrome include classical EDS, which tends mostly to affect the skin, and vascular EDS, which causes weak blood vessels and problems with internal organs.

But the most common type is hypermobile EDS - sometimes referred to as hEDS - which turned out to be Clayton's diagnosis, too. As a result, she experiences a range of problems that impact her everyday life.

"I get more tired and my muscles work a lot harder to hold me together, so I get aches and pains," she says. "I'm in constant chronic pain, which causes brain fog and irritability, and I don't go out to busy places for fear of being knocked into."

If you have a non-EDS form of HSD, or even hEDS, it's not necessarily all doom and gloom. Strengthening the joint(s) through appropriate exercise, together with pain medication if needed, will usually make a significant difference,

"With this condition, the ligaments that stabilise the joint are often long and weak, which leads to the increased movement," explains Morse. "Muscles also cross joints, so if strength, coordination and movement patterns are improved within these muscle groups, it can help to take the pressure off the joint and to protect from excessive movement."

If you have severely hypermobile joints, they can be supported with splints or sports taping. The most important thing, though, is that you're aware of the normal range of movement of the affected joints, and correct your movement accordingly.

A physiotherapist or trained exercise professional can help to devise a suitable programme for your individual needs.

It has been brought to our attention that in the original version of this article, we referred to joint hypermobility syndrome, a term which has been replaced by the term hypermobility spectrum disorders (HSD) which includes Ehlers-Danlos, and mentioned that hEDS is sometimes referred to as type 3 EDS, which is no longer the case.

We apologise for this oversight and have now updated the article to its current form. 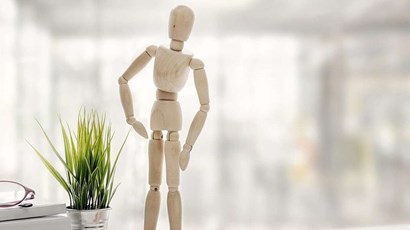 What is hypermobility syndrome?

I walked into the hospital yesterday for elective surgery to improve ROM and remove metal after a bad multiple fractured shattered elbow over 10 months ago. Instead I walked out with another fracture....