Ever wondered why the battle over the thermostat often constitutes a battle of the sexes? Research suggests the answer to that age-old question is simple - women feel the cold more than men.

You may have heard the expression that horses sweat, men perspire and ladies glow.

Leaving horses aside, it would seem there's some scientific weight behind the old saying, believed to have originated from Victorian etiquette guides.

Consequently, as we find ourselves once again amid the icy depths of winter, it's more likely that women will be feeling the cold more than men and itching to turn the thermostat up.

Why? According to Mike Tipton, professor of human and applied physiology at the University of Portsmouth, research points to the differences in skin blood flow between men and women, which affects body temperature.

"We have conducted studies where we have taken men and women into a warm environment, and then cooled that environment," explains Tipton. "What you'll find is that women have a much more sensitive vascular response to the cold, which means they shut down their blood flow sooner, tighter and for longer than men.

This, adds Tipton, makes women much more susceptible to lower temperatures, as well as sudden changes in temperature, such as draughts. It also means women tend to have colder hands and feet - the temperature of both being an important determinant in how hot or cold people feel.

"Hand and foot temperature are maintained by blood flow, so if the blood flow is shut down - as is found in women - then skin temperature falls, creating the sensation of cold hands and cold feet, determining your overall level of comfort perception in the cold. This means you can have people who have a reasonable chest temperature or back temperature, but if they've got cold hands, they'll feel cold."

Another aspect to take into account is that women, on average, have around 10% more body fat than men. This protects their vital organs from the cold, but insulates the skin from the body's heat.

"Because women have more body fat, which doesn't have much in the way of blood supply, it insulates the skin, so their skin temperatures tend to be lower," says Tipton. "It's a bit like having more loft insulation in your house."

Ever wondered why the battle over the thermostat often constitutes a battle of the sexes? Resear...

The answer to the thermal disparity between men and women is most probably rooted in evolution, says Dr Sarah Jarvis, clinical director of Patient.info.

"Homo sapiens evolved in the tropics, and dying from too much heat was much more of a risk than succumbing to hypothermia," she says. "In those days, men were out getting hot and sticky hunting and gathering while women stayed at home looking after the children.

"That meant men needed highly evolved ways of avoiding overheating, which is where sweating comes in. Men were doing more exercise, which helped keep them warm. Women were also smaller, meaning they had a higher surface area-to-volume ratio - and the surface of your body is where you lose heat from."

As with most things, however, there are exceptions to the rule. For instance, a man who has suffered a non-freezing cold injury (prolonged exposure to wet conditions just above freezing - the classic conditions to lead to trench foot) is likely to feel the cold as much as a woman - perhaps even more so. On the other hand, a women experiencing the menopause is likely to report hot flushing, even in a cool environment.

Furthermore, if a man and a woman were matched together, of the same height, weight and amount of subcutaneous fat, "many of the differences in the ability to thermo-regulate disappear," says Tipton. Of course, genetic variation dictates that this is rare.

"This is very much an academic argument though," he says. "In the real world, males tend to be much bigger and more muscular, while women are smaller. These factors all make a difference when it comes to thermal sensitivity. That's why Raynaud's is nine times more common in women than it is in men."

Irrespective of one's gender, we will all at some point this winter feel the chill. So, how best to stay warm?

"Wear layers rather than a single layer of thick clothes," advises Jarvis. "Layers trap warm air and provide better insulation. If your hands and feet get cold, wrap up your whole body rather than just the cold bits. Cold hands and feet are often due to the body's attempts to reduce energy loss in order to keep core temperature up.

"Also, don't be tempted to sit right in front of the radiator when you come in. If you have Raynaud's, it can lead to increased pain as circulation returns and can contribute to chilblains."

On some occasions, an intolerance to the cold - and heat - may indicate an underlying cause.

One of the most common causes of cold intolerance is underactive thyroid, points out Jarvis, as is anaemia. People with fibromyalgia can also feel unduly cold, while those with Raynaud's can develop painful shutting down of the circulation in fingers, toes and other peripheries in response to cold.

"If you haven't been diagnosed with any of these conditions, and have newly become more heat or cold intolerant, it's worth seeing your GP." 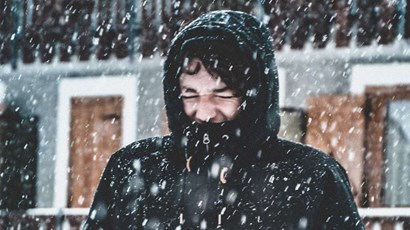