Chromosomes are found in the centre (nucleus) of a cell. They carry genetic information in the form of genes.

However, egg and sperm cells only have 23 chromosomes. This is so that, when an egg and a sperm meet during conception, the child that is produced also has 46 chromosomes in each cell.

New body cells are produced for growth and repair by cells dividing, producing two 'daughter' cells. This process is called mitosis. Each chromosome can duplicate an exact copy of itself so that each new cell that is formed has a full, identical set of chromosomes.

Cell division that produces reproductive cells (egg and sperm cells) is slightly different. The process is called meiosis. Four 'daughter' cells are produced that have half the number of chromosomes of the original cell - so 23 chromosomes (one of each pair).

If cells do not divide properly, either during mitosis or meiosis, one of the 'daughter' cells produced may receive two copies of a chromosome while the other cell receives none. So, two abnormal cells are produced. This error in cell division is called nondisjunction.

What is Down's syndrome?

About 94 in 100 people with Down's syndrome have full trisomy. That is, all of the cells in their body have an extra copy of chromosome 21. Full trisomy 21 can occur in an embryo due to nondisjunction during meiosis as described above. The chromosomes of the mother and the father are normal. In this case, Down's syndrome is caused by the inheritance of an extra chromosome (either from the mother or the father) that occurs by chance at the time of conception.

In about 4 in 100 people with Down's syndrome, it is due to a translocation. This means that one of the affected child's parents carries a translocated chromosome. That is, part of one of their chromosome 21s becomes attached to another chromosome. (It is often chromosome 14 that is affected.)

However, the extra chromosome 21 material can be passed on to their offspring, so producing a child with Down's syndrome.

What are the features of Down's syndrome?

It is usually quite easy to recognise that someone has Down's syndrome by their typical facial features which include:

Problems with physical and mental development

Around half of babies with Down's syndrome will have a congenital heart defect (that is, a heart problem that they are born with). The most common problem is an atrioventricular septal defect (AVSD). This is a hole in the muscle that usually separates the different chambers in the heart. There can also be problems with the valves in their heart. If someone has an AVSD, it means that the blood flow around their heart becomes abnormal.

An AVSD can usually be fully corrected with surgery if it is detected early. Therefore, all babies with Down's syndrome should have a thorough examination of their heart shortly after they are born. If there is any suspicion of a heart problem, doctors will usually refer the baby for an ultrasound scan of their heart, called an echocardiogram. Other heart problems can sometimes develop later in life in those with Down's syndrome. Therefore, a regular check-up of the heart is needed.

Someone with Down's syndrome is also at increased risk of developing other medical problems or conditions. These can include:

How common is Down's syndrome?

Large studies have been carried out to look at the risk of Down's syndrome related to a mother's age and have shown that:

However, it should also be remembered that the risk of conceiving a baby with Down's syndrome is actually higher than the above figures. This is because about three quarters of embryos or developing fetuses with Down's syndrome will never actually develop fully and so a miscarriage will occur before a baby is born.

How is Down's syndrome diagnosed?

Down's syndrome can either be diagnosed before birth (prenatally) or after birth (postnatally).

If you are pregnant, there are various Down's syndrome screening tests available during your early pregnancy to look at your risk of having a baby with Down's syndrome. All pregnant women should be given the option, or choice, of having one of these tests. However, these tests are not compulsory.

Screening tests for Down's syndrome usually involve a blood test and a special ultrasound scan called a nuchal translucency ultrasound scan. This scan is carried out in a similar way to other ultrasound scans that you will have during pregnancy. However, it focuses on measuring the thickness of fluid that collects behind your baby's neck while they are developing in your womb. It is normal for all babies to collect some fluid here but babies with Down's syndrome tend to collect more fluid than normal.

Down's syndrome may be suspected shortly after birth because of the typical features that a baby with Down's syndrome has (see above). Diagnosis is confirmed by genetic tests to look at the karyotype of your baby. This is essentially their genetic make-up. It involves your baby having a blood test. The chromosomes in their blood can then be examined to look for an extra chromosome 21.

Are any further investigations needed?

If your baby is diagnosed with Down's syndrome, various other tests may be suggested by their doctor to look for medical problems associated with the condition. For example, an ultrasound scan of their heart (echocardiogram) can show if they have any heart defects. A hearing test known as a brain stem auditory evoked response can detect hearing problems. Eye tests can look for visual problems.

What is the treatment for Down's syndrome?

Early intervention programmes from birth are important for a baby born with Down's syndrome. Such programmes can include speech and language therapy, physiotherapy, etc. They can help with the learning and development of a child with Down's syndrome. The earlier that such help and care are given for any problems, the better the long-term outcome is likely to be and the more likely that person is to reach their full potential.

A number of different healthcare practitioners are likely to be involved in the care of someone with Down's syndrome. The people involved will depend on the problems that are faced by the individual with Down's syndrome. For example, the team of people involved can include a doctor specialising in the care of children (a paediatrician), your GP, a heart specialist (cardiologist), an eye specialist (ophthalmologist), a speech and language specialist, a physiotherapist, an occupational therapist, a social worker, etc.

Someone with Down's syndrome will need regular medical follow-up. In babies and children it is important to monitor their growth and development. When their teeth develop, they will also need regular dental checks. Monitoring for heart problems, hearing problems and eye problems is also important. A healthy, balanced diet is needed and exercise should be encouraged to reduce the risk of weight gain and obesity.

Will someone with Down's syndrome be able to lead an independent life?

Support for parents and carers

Having a baby with Down's syndrome can be a difficult thing for some parents to cope with. However, you should never feel that you are alone. Great support and advice for parents who have a child with Down's syndrome are available through the Down's Syndrome Association and a number of other support groups detailed below. 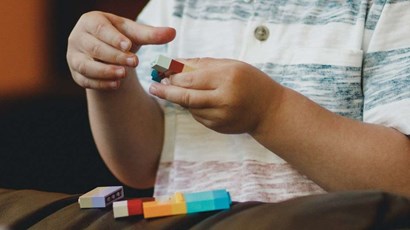 How to support your child with a learning disability