What is sickle cell trait?

Who gets sickle cell trait?

Actually, the inheritance of SCD is slightly more complicated than that. This is because there are other haemoglobin genes which can interact with sickle cell trait. If you have one of these genes plus a sickle gene, you also get SCD (the combination behaves like two sickle cell genes). Examples of these interacting genes are HbC, beta thalassaemia, Hb Lepore and HbO Arab.

The result of these genes is that an important body chemical called haemoglobin is altered. This is what affects the red blood cells and makes them change into a sickle shape. With sickle cell trait, you have only small amounts of altered haemoglobin, so the blood cells are not much affected (unless conditions are very extreme). With sickle cell disease, there is more altered haemoglobin and the red blood cells easily change into sickle shape, which causes various problems. These are described in more detail in our separate leaflet called Sickle Cell Disease.

Sickle cell trait is diagnosed in the same way as SCD. It involves a blood test. The test may be offered to pregnant women and if necessary their partners. Babies may also need the test.

These can occur in conditions where oxygen is extremely low - such as flight in an unpressurised aircraft, very high altitude or problems during a general anaesthetic. Also, if you become severely lacking in fluid in the body (dehydrated).

In these situations, sickle cells can form and can block small blood vessels. This may cause episodes of pain in bones, muscles or the spleen. If in the spleen, it is called splenic infarction and may cause pain in the tummy (abdomen) or chest. These problems may be severe enough to make you very unwell and to need treatment in hospital. They will usually clear up with treatment and when oxygen and hydration levels are back to normal.

To avoid possible complications, you should

Sometimes people can become seriously ill as a result of extreme physical training. This can particularly occur if it is a forced pace, under very hot conditions, if they are unused to the training, or if they do not drink enough fluid. Anyone can become ill under these conditions, but people with sickle cell trait are probably at higher risk.

In these conditions, people with sickle cell trait may get pain episodes or pain in the spleen (as explained above).

How can complications of severe exercise be prevented?
The following are a few recommendations which may be useful to prevent complications occurring:

To help prevent these problems, advice is to avoid dehydration by drinking enough fluid. To prevent a DVT or a pulmonary embolus, keep mobile and move your legs when on a long journey or flight. See separate leaflets called Deep Vein Thrombosis, Preventing DVT When You Travel and Pulmonary Embolism for more details.

If you have sickle cell trait, you are more at risk of severe complications if you catch malaria. If you visit any area where there is a risk of malaria, it is absolutely essential that you take antimalarial tablets. You must also take precautions to avoid being bitten by mosquitoes.

Younger children are extremely unlikely to have any symptoms. They will usually be no more prone to becoming ill than children who do not have sickle cell trait. Older children and young people who do heavy physical exercise may have the same complications as adults (see above). 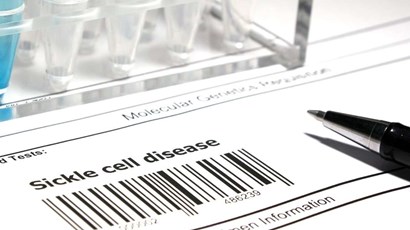