What are tendons and tendon sheaths?

A tendon is a strong tissue that attaches a muscle to a bone. For example, the tendons that you can see on the back of your hand come from muscles in your forearm and allow you to move the bones of your fingers.

Some (but not all) tendons are covered by a sheath called the synovium. The synovium makes a tiny amount of oily fluid which lies between the tendon and its overlying sheath. The fluid helps the tendon to move freely and smoothly when it pulls on the bone to which it is attached.

What are tendinopathy and tenosynovitis and what causes them?

Tendinopathy and tenosynovitis are types of tendon injury. They can often occur together. Strictly speaking:

It is thought that inflammation of the tendon and the tendon sheath is not the whole picture in all cases. Most of the time there is overuse, or history of several repeated small injuries or tears, to the tendon. This may initially cause some inflammation of the tendon. But, in the longer term, if these injuries continue, it can lead to tendon damage (degeneration). Doctors now feel that tendonitis and tenosynovitis should actually be called tendinosis or tendinopathy.

These injuries typically occur when tendons are overused. For example, this may be after playing a lot of sport, or overuse in the course of your work. Tenosynovitis commonly occurs around the wrist. Overuse by lots of writing, typing, assembly line work, etc, can trigger injury. This type of overuse tendon injury is also known as repetitive strain injury (RSI).

However, in some cases, there is no history of overuse of the tendon, and tendinopathy or tenosynovitis seem to occur for no apparent reason.

There are also some other causes of tendinopathy and tenosynovitis:

Who develops tendinopathy and tenosynovitis?

These problems are more common in middle-aged adults and particularly in people who are quite sporty. Some kinds of tenosynovitis, such as tennis elbow, are more likely to develop if you suddenly start using a set of muscles which have not been exercised much in the past.

They may be more common if your work involves repetitive movements such as writing, typing, supermarket checkout or use of a computer mouse. This is particularly likely if you use the same muscles repeatedly by doing the same movements.

What are the symptoms of tendinopathy and tenosynovitis?

Tendinopathy usually occurs at the part of the tendon that attaches to the bone: the sheath of the tendon that is affected in tenosynovitis is close to this attachment. The main symptoms are pain, tenderness and sometimes swelling or even a lump in the affected part of the tendon. The pain is typically when you move the affected area. The overlying skin in that area may also feel warm. You may not be able to move the part of the body that is pulled by the affected tendon as easily as normal or it might feel weak. The area may feel stiff. In some cases the condition lasts just a few days and then goes away on its own. In other cases it can last weeks or months if not treated.

Any tendon of your body may be affected. However, some areas of your body are more prone to these problems. For example, tendons around your wrist and hand are the most commonly affected. Some types of tendinopathy and tenosynovitis cause very characteristic symptoms and have their own name. For example:

If you think you are developing either a tendinopathy or tenosynovitis and can treat it yourself by avoiding whatever set it off and taking other simple measures such as those listed below, that is great. However, you should get medical advice if you have symptoms that are:

How is tendinopathy or tenosynovitis diagnosed?

As well as listening to you describe your symptoms, your doctor will need to examine you to diagnose either tendinopathy or tenosynovitis.

Usually not. The diagnosis of tenosynovitis and tendinopathy can usually be made when your doctor talks to you and examines the affected area. If an infection is the suspected cause (rare) then blood tests and other tests may be done to find the cause of the infection. Sometimes, if the diagnosis is uncertain, your doctor may suggest an X-ray, an ultrasound scan or an MRI scan of the affected area but this is usually to make sure it isn't something more serious.

What treatment is there for tendinopathy or tenosynovitis?

If your symptoms have been caused by carrying out the same movement repeatedly, it is important to try to avoid this movement. Otherwise, the best treatment for tendinopathy or tenosynovitis is uncertain. However, one or more of the following treatments may be used:

What about other treatments also being used to treat tendinopathy and tenosynovitis?

Recovery usually takes weeks to several months. How long depends on which tendon or tendon sheath is affected. It also depends on whether it is possible to rest the affected area easily. For example, if you are left-handed and have developed tenosynovitis in your left wrist brought on by a particular activity that you don't usually do, this is likely to settle more quickly than if you have it in your right wrist and can't identify what triggered it.

If your problem is work-related, your employer has a legal duty to try to prevent the development of tendinopathy or tenosynovitis by making the work environment comfortable and doing whatever is reasonable to achieve this.

Can tendinopathy or tenosynovitis be prevented?

There is no proof that anything can prevent a bout of tenosynovitis or tendinopathy. However, the following are sensible suggestions that may help to prevent either coming back: 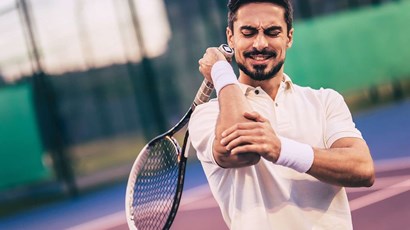 I have developed widespread tendonitis throughout my whole body. It s in my arms ,elbows, shoulders, hips, knees and feet. What could be causing my tendons to be so weak and break down so easily ? Is...