Wheeze is common, especially in children. It can also very scary, both for the parent/s and for the child. Despite many parental concerns, wheezing often isn't due to asthma, although it's more likely to be the cause if your child has been diagnosed with asthma.

Asthma can be a medical emergency - so if your child is wheezing, it's important to know the warning signs to look out for and what to do.

What causes wheeze in children?

At least 2 in 5 children have at least one episode of wheezing before they are 6 years old. When my patients think of wheeze in their children, they almost always assume it's due to asthma. In fact, there are many other causes of wheezing - and sometimes, as we'll see later, what sounds like wheeze in a young child may not be wheezing at all.

Wheezing is a sound that comes from air being breathed out (or less often in) through narrowed airways. Because children's airways are smaller than adults, they become narrowed enough to cause wheezing more easily. In asthma, the airways themselves are narrowed because the muscle lining the airways contracts. However, mucus or other secretions partially blocking the airway can also cause wheezing. So too can inflammation of the lining of the airways. Less commonly, an object you've inhaled can get stuck in the airways.

The most common reason for wheezing in children is infection with viruses such as the ones that cause the common cold. This is called 'viral wheeze'. Many children with viral wheeze aren't short of breath or distressed and recover quickly with no ill effects.

Croup is a viral infection most common in children aged between 6 months and 3 years old. Classically, it gives rise to a barking cough, caused by inflammation of the vocal cords in the larynx. It can also cause shortness of breath and it may sound as if your child is wheezing.

Bronchiolitis is also caused by a virus - in this case usually the bronchiolitis means inflammation of the bronchioles. It is usually caused by a virus called the respiratory syncytial virus (RSV). It's most common in babies aged 3-6 months and is much less common in toddlers and older children. Along with cold symptoms, babies often develop wheezing, rapid breathing and sometimes difficulty breathing.

Signs to look out for

Regardless of the cause of breathing problems, there are certain signs to look out for if your child is wheezing or coughing.

If your child develops these symptoms, seek urgent medical advice.

When I was a girl, we used to call a really nasty cold a 'sneezy-wheezy-can't-breathe-easy'. Act...

Does age matter where wheeze is concerned?

There is some good news for parents of wheezy babies and toddlers. Perhaps counterintuitively, as a rule, the earlier the child gets wheezy for the first time, the more likely they are to grow out of it quickly. There appears to be something of a cut-off at around 2 years old: most children who first see a doctor for wheeze before this age stop having symptoms by mid-childhood

Could my child have asthma?

In adults, there are various reliable tests for diagnosing asthma. These include:

Unfortunately, it's almost impossible to get reliable readings from children aged under 5, which means your doctor will have to rely on their symptoms and examination to make a diagnosis. For instance, while almost all children get intermittent cough, wheeziness and/or symptoms brought on by exercise, 3 in 4 of these children don't have asthma.

Teasing out asthma clues in children

Certain factors make it more likely that your child has asthma. These include:

When should I worry about my asthmatic child's wheezing?

There's no doubt that having a child with asthma is a concern, and that children can become unwell rapidly. Children younger than 5 years old with asthma are more likely to require urgent healthcare than any other age group with asthma.

Part of the problem is that younger children in particular can't explain their symptoms in the way adults can. If your child has asthma, it's natural to be on the lookout for symptoms - especially since you should have been given advice on what treatment to offer if your child is wheezy.

During an asthma attack, the lining of the bronchioles (small airways) becomes inflamed and the muscles surrounding the bronchioles tighten. This causes shortness of breath and wheezing.

Hopefully, if your child has asthma, you'll have been given an asthma action plan, explaining what to do if your child is wheezing or breathless. But knowing if your child is wheezing is not as straightforward as it sounds. In younger children in particular a whistling sound often comes from the upper airways, including the nose, rather than from the lungs. In practice, parents and their doctor or nurse disagree about whether wheeze is present in over half of consultations.

If you're not sure how to identify if your young child is wheezing, a validated device such as the Omron Wheezescan uses an algorithm based on over 600 children with asthma symptoms, to tease out the difference between the sound of wheezing and other lung sounds.

Disclaimer: Dr Sarah Jarvis has acted as a medical advisor for Wheezescan. 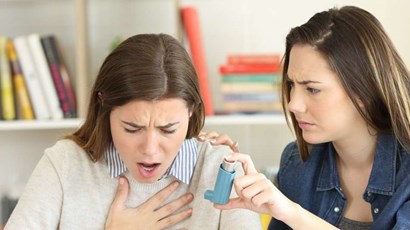