Superficial thrombophlebitis is inflammation of a vein just under the skin, usually in the leg. A small blood clot also commonly forms in the vein, but is usually not serious. The condition usually settles and goes within 2-6 weeks. Treatments can ease pain or discomfort.

What is superficial thrombophlebitis?

Note: this leaflet does not deal with inflammation or thrombosis of deep veins. The deep veins are larger, pass through the muscles in your arms and legs and you cannot see or feel them. Some people get confused between superficial thrombophlebitis and deep vein thrombosis (DVT). They are quite different. A DVT is more serious.

Many cases occur for no apparent reason. A slight injury to the vein may trigger the inflammation in some cases.

There are a number of risk factors that make it more likely for inflammation to develop in a vein:

What are the symptoms of superficial thrombophlebitis?

Swelling, redness and tenderness along a part of the vein are the usual symptoms. You may develop a high temperature (fever). If a blood clot develops inside the inflamed part of the vein, the vein may then feel hard or knobbly. The blood clot is usually of little concern, as it is small. There are other veins which carry the blood and bypass the blocked vein.

When the inflammation settles, a persistent darker area of skin (hyperpigmentation) may remain over the affected vein. A small firm lump may also persist below the skin. This may be tender to the touch for some time.

Your doctor is usually able to diagnose superficial thrombophlebitis by talking to you and examining the affected area. Investigations are not usually needed, especially if you have one of the risk factors for superficial thrombophlebitis (see above). However, if your doctor is concerned that you may have a DVT (see below), they may advise that you have some tests to exclude this. This usually means a special ultrasound scan of the affected area to look for any clots in the deep veins.

What is the treatment for superficial thrombophlebitis?

Most bouts of superficial thrombophlebitis last for 3-4 weeks. If they are associated with varicose veins, they are likely to return (recur). No treatment may be needed if the symptoms are mild. One or more of the following treatments may be advised, depending on your symptoms and the severity of the condition:

If your doctor feels that you may have a DVT or be at high risk of developing one, they may suggest that you be referred either to the hospital or to a special DVT clinic. This will enable you to have any investigations or treatment necessary (see above). Sometimes, 'just in case' (prophylactic) treatment may be given to people who have superficial thrombophlebitis and may be at high risk of developing a DVT. This involves injection of a medicine to thin the blood.

Are there any complications from superficial thrombophlebitis?

The inflammation and pain usually settle within a few weeks. Most people make a full recovery. The possible complications listed below are uncommon. They are listed, however, to give guidance on what to look out for. See a doctor as soon as possible if you suspect that a complication is developing.

Sometimes the affected vein becomes infected. The pain may then become worse and the redness spreads. You are likely to feel generally unwell. Infection is more common in someone who has had a drip inserted for a long period of time, in people who abuse 'street drugs' or in people with a weakened immune system. Antibiotics are needed to treat the infection. If the infection is severe, you may need to be admitted to hospital for antibiotics (given directly into a vein). Rarely, infection in a vein becomes severe and may spread to other areas of the body.

See a doctor urgently if:

When thrombophlebitis leads to a DVT, there is an increased risk of developing further DVTs and possibly clots on the lung (pulmonary embolism).

It is common for people with varicose veins to have repeated (recurrent) bouts of superficial thrombophlebitis. However, for a small number of people this may be the first sign of a more serious condition. For example, cancer or a rare condition called polyarteritis nodosa in which there is patchy inflammation of the walls of the arteries. This is more likely if the bouts occur at different sites, or in different veins in someone without varicose veins.

Tests may be advised if there is no obvious explanation for recurring bouts of superficial thrombophlebitis. 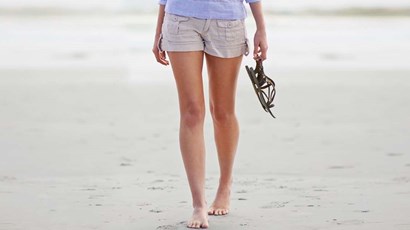 How to treat varicose veins

im 13 wks pregnant and when i stand up my heart rate increases to150 and i feel dizzy?