Hypothyroidism - an underactive thyroid gland - can result in everything from weight gain to depression, and according to the NHS affects one in 70 women and one in 1,000 men. We talk to a GP about effective diagnosis and treatment.

Located at the front of the neck, the butterfly-shaped thyroid gland may be small but it has a big impact on health and well-being.

One of its primary functions is to produce the hormones triiodothyronine (T3) and thyroxine (T4), which help regulate the body's metabolism, the process that turns food into energy.

Thyroid hormones are essential to the normal functioning of a wide range of bodily processes, everything from metabolism to energy levels and fertility.

If the thyroid gland doesn't produce enough T4, it is said to be underactive, known as hypothyroidism.

Every day, more than one million people in the UK treat the condition by taking the thyroid hormone levothyroxine sodium (L-T4), which normalises the blood's level of thyroid-stimulating hormone (TSH), the hormone secreted by the pituitary gland that regulates T4 and T3 production.

The good news is that the majority of patients with hypothyroidism respond well to levothyroxine treatment, which is usually taken daily as an oral tablet.

However, it can take some trial and error to get the right dose. Too much levothyroxine may cause palpitations and even trigger heart problems in some patients, so your doctor will start with a relatively low dose, building it up as necessary, on the basis of further blood tests.

The thyroid is a tiny gland located in your neck that produces hormones responsible for regula...

Is diagnosing an underactive thyroid difficult?

Diagnosing an underactive thyroid, particularly in the early stages, can be tricky, precisely because the outward signs are often vague. As a result, patients may suffer from low-grade symptoms for months or even years if not tested.

If the condition isn't treated, hypothyroidism can rarely cause myxoedema, a serious illness that results in extreme lethargy, and can even lead to coma and death. Fortunately this extreme situation is uncommon in the Western World.

Occasionally, an underactive thyroid can also be indicative of other more serious medical conditions.

"Cancer of the thyroid, for example, can very occasionally affect thyroid function, although it is more commonly heralded by the appearance of a swelling at the front of the neck, hoarseness or difficulty swallowing," explains Morrison.

The good news is a thyroid function test is quick and simple, so ask your GP about it if you're concerned.

So an underactive thyroid can either be indicated by a high reading of TSH, or low levels of T4, or both. Standard NHS thyroid function tests measure both of these. Occasionally, T3 is measured but this isn't generally considered necessary.

"When it comes to treatment of thyroid deficiency, most doctors are satisfied that giving T4 in the form of levothyroxine sodium is perfectly effective," says Dr Morrison. "However, some practitioners argue that T3 is stronger and works more quickly, and recommend it for those few patients who don't appear to respond to T4 alone.

"The relative merits of T4 and T3 have been debated and studied, but the view of the NHS is that there is no convincing evidence for the need of T3, rather than T4."

What causes an underactive thyroid?

Ironically, the most common cause of hypothyroidism occurs when the thyroid cells come under attack from the body's immune system, an autoimmune condition known as Hashimoto's thyroiditis.

The exact causes of Hashimoto's disease remain unclear, but doctors do know that it runs in families, and is more common in women, those over the age of 40, and in people suffering from other autoimmune diseases such as type 1 diabetes, vitiligo and coeliac disease.

Hashimoto's disease can also be the result of a lack of iodine due to dietary deficiency. Iodine deficiency is common in remote inland areas of the world, where access to fish and seafood is limited. For many years, it was assumed that iodine deficiency was rare in Western countries such as the UK. However, following a study of schoolgirls in 2011, the World Health Organization now classifies the UK as 'mildly iodine deficient'.

Rarer still is thyroid deficiency caused by inactivity of the pituitary gland at the base of the brain.

Certain medications, including lithium, amiodarone and interferons, are also know to affect thyroid function, as can previous thyroid surgery or radioactive iodine therapy employed to treat both hyperthyroidism (where the thyroid gland produces too much hormone) and thyroid cancer.

Occasionally, babies are born with congenital hypothyroidism because the thyroid gland doesn't develop properly in the womb. This is usually picked up during routine screening soon after birth.

As for dietary causes of hypothyroidism, certain studies suggest that iodine deficiency - particularly in pregnant women and women of childbearing age - may be prevalent in the UK.

"Iodine deficiency only results in hypothyroidism in adults when it is a severe deficiency and not at the mild-to-moderate level seen in UK and parts of Europe," notes endocrinologist Dr Mark Vanderpump, a former president of the British Thyroid Association and a member of the UK Iodine Group.

Those on vegan diets may have an inadequate intake of iodine if they don't take a supplement, and this can be compounded by eating a lot of cruciferous vegetables such as broccoli, cabbage, sprouts and cauliflower, as these contain a substance which impedes the absorption of iodine.

"However, non-dietary hypothyroidism is being detected in greater numbers," says Dr Morrison. "This may be because the population is ageing, and probably also represents better recognition and detection rates." 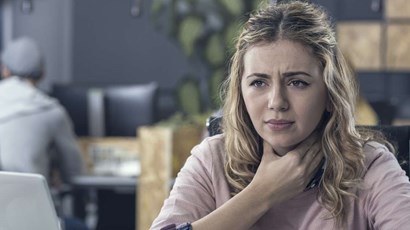 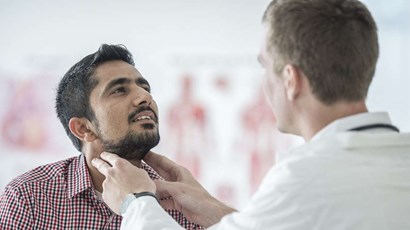 does anyone else out there have same issue as me. i have been told at 3 different hospitals for past 3 fna's over last 6 years of thyroid nodules that they have never seen anyone swell and bruise...